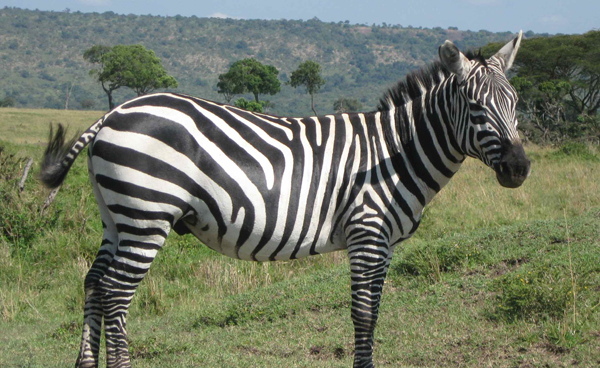 Safari’s Unlimited, owned by Gordon Church, was an incredible outfit. We were so well looked after, the staff was delightful, the guides knowledgeable, and of course the horses were terrific. Gordie loves, cares and  respects everything about his great country of Kenya including  the land, the horses, his staff (some of whom have been with Safari’s Unlimited for over 20 years) and the local tribespeople. The staff outnumbered our group 20 to 14. Camp moved every 2 days and all the provisions for the entire group were brought along with us from the beginning.

If you are wondering about the food with Safaris Unlimited – fear not! We have wonderful breakfasts with choice of eggs, cereal (hot and cold) toast, yogurt and more. Lunches were often served in the bush and there was always a variety of choices. For those that like to imbibe before siesta time there was wine. For evening dinners we would gather around the fire after having our hot showers. Darkness falls at about 7:00 p.m. with only 15 minutes difference in the length of day between winter and summer. The staff was confused when Beth kept talking about the Spring Solstice while we were there (September 21st) as they think of only 2 seasons, summer and winter. Your choice of drinks and appetizers were served around the camp fire, then we would sit down to a 3 course meal every evening. Samson would announce the menu followed by the list of after dinner drinks. Amarula (a local liqueur similar to Bailey’s cream) was a favorite along us along with Milo and Ginger Tea. Then off to bed in our tents outfitted with hot water bottles. This was a popular favorite for those who have cold toes  like me!

Our trip began on the 11th of September when Brad and I boarded a plane for London and then Nairobi. We had time in  Heathrow Airport to do a bit of shopping. We arrived in Nairobi after dart on the 12th. Brad and I left 2 days early to get some needed R&R before starting the Safari. We spent our first night at Giraffe Manor, a manor house built by a Scotsman for his wife while he went hunting back in the 1800’s. Now it is home to the Rothschild Giraffe, an endangered species. There were 3 young giraffe and several adult females around the Manor. At night they go across the street into a Game reserve where the male giraffe resides. It was such a great way to wake up in Africa with giraffe at the front door!

From there we went to the Serena Hotel for 2 nights were we met the other members of our group. Some of us did the tourist thing in Nairobi visiting the game reserve, the animal orphanage and the Rothschild Giraffe Education Center. Brad and I spent one day by the pool just kicking back and unwinding from the mad dash of being away from home for 3 weeks.

Monday morning we all met at the front of the hotel by the Safaris Unlimited vehicles. [Click here for a PDF of the itinerary ] Three Land cruisers and a van too all of us (and our gear) to Keepers, Gordie’s home just on the outskirts of Nairobi. Here we met our host, guides and office staff. The horses had already made the 6 hour journey to camp earlier that week giving them time to settle in before our safari. After a briefing and some more coffee, we loaded up in the vehicles and headed out for the 5 hour drive to camp.

Along the way we passed through many towns and villages. There is a tremendous amount of road work going on but even still the road was definitely a bit rough. As we passed into the Rift Valley we stopped at the top where there were several curio shops. You could see forever it seemed. The Rift Valley is continuing to spread so it is just a bit bigger each time you see it. From here we traveled down into the valley, through several more towns and finally  arrived at the campsite. While the road was bumpy (I am sooo glad I brought my back support that I use on airplanes) the experience was well worth it. You get a feeling for the land, it’s people and the struggle between development and the environment. Kenya, which was only 11% forested is down to 1%. The people work hard and are very creative. We saw wheat drying on canvas sheets, which was then shoveled into trucks and taken to the local granary. People were selling vegetables along the road. Potatoes were stacked in small pyramids. Corn on the cob was roasted in small fires for sale and donkeys were used for hauling just about everything. Everywhere you go you see small vans which serve as the local bus system throughout Nairobi and the countryside. On the Mara even the Maasai take the little buses to town.

Once we arrived at Camp were were allowed to choose our tent. We stayed in the same order so when camp moved Brad and I were always in tent no. 1. Sometimes the tent was different (we could tell by the way the zipper worked on the thunder-box but everything was always in place at the new campsite. We were so impressed when I had left a few items on the table in the tent and when we got to the next campsite these items were placed exactly where I had left them!

After lunch we went for an afternoon ride. Gordie assigned horses to everyone. I was impressed with his ability to read the riders in a few short minutes and choose the appropriate horse for each rider. I had a wonderful little mare called Kashan. She and I got along really well. I had picked up some packets of seed mix in Heathrow airport to snack on while on the rides. Soon I discovered Kashan really liked the seeds so I didn’t get many after all. She also liked the peanuts we packed in our saddle bags.

As we moved camp every two days we would ride out around the area on one day and then travel to the next camp the second day. We were in 4 different campsites each different and interesting. Lions had been in first camp the night before we arrived. They had been right outside out tent! And of course, Gordie would tell stories about the lions at dinner to keep us all amused.

The men in charge of the horses took great care to get the them ready for each ride, assist those who needed help mounting get on and receive the horses upon our return. We could help if we wanted but if someone was tired they could head off to their bunk, no problem. The horses were well cared for and the grooms has obvious affection for the horses.

As for the riding each day, one cannot truly describe in words or photographs the vast expanses we rode across. At times I wondered if this was what the great American Plains must have looked like to the settlers as they took their wagons to California. The herds of wildebeest were incredible, number in the 10’s of thousands. At times you would look out and see black dots to the horizon, each one representing a gnu. On the long ride we got caught in a rain storm. We hunkered down until it passed and then rode into camp another hour or so. Fortunately the wind remained warm so we didn’t freeze too badly. We had left at dawn and got into camp 12 hours later at dusk.

The game was plentiful and we could get quite close on horseback. When approaching a herd of cape buffalo Gordie has us all crouch down along side our horse’s necks so we didn’t stick up out of their back. We were able to get quite close as they couldn’t figure out what animal we were. There were also opportunities to go out in the vehicles to look for game at day break or in the evening. Twice we went to purchase beads and trinkets from two different Maasai tribeswomen. They were shy at first but once the bargaining got going it was quite lively! The chief of a Maasai tribe near one camp came to visit us in the evening. He sat around the camp fire singing and getting others to join in. What a character he was! He also would put some beads around your neck and before you knew it you had bought it.
The final camp was on the bank of a river with over 100 hippos in it. My previous two trips to Botswana came up short on hippos so this was my first experience. How incredible! They make this raspy laughing sound at each other which goes on all evening. Then at dusk they lumber out of the river to go feed. About 3 AM they cam crashing back into the river and woke us up with their splashing and laughing.

All in all this was an incredible experience. I have visited with several of the folks who were on the ride. They have been dreaming of Africa every night, sharing photos and can’t wait to go back – tomorrow if possible! I am planning on taking another group to Kenya in the Spring of 2010. So if you are interested pop me an email and I will put your name down on the list. Until then enjoy the photos in the gallery. I will continue to post more photos until I run out, but that might be awhile!