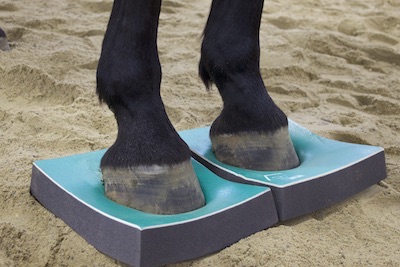 Susan brought Dante to me 5 years ago because he was lame hoping I could help him using my skills as a Feldenkrais Practitioner®. For three years both he and Susan made steady progress, not only becoming sound but also successfully showing in Dressage. In May 2012 Dante arrived for his monthly lessons. I noticed immediately that he was off in the right hind leg. Susan explained that she had changed saddles about 1 month prior and within that time the farrier quicked him because he was difficult during his last shoeing.  I watched him go and knew there was something different from the last time I had seen him. I asked Susan about the saddle and we took a look. It was crooked, putting more pressure on Dante’s lower ribs on the right side. This could easily explain the change in movement. Fortunately Susan had her other saddle with her. We switched and Dante was better but not completely sound. I drove home that night thinking about what we were going to do in her lesson the following day.

That night I spoke with Dr. Joyce Harman,a  holistic veterinarian and good friend of mine. During the conversation we started talking about standing on pads while working on the computer and then Joyce mentioned that they were doing this kind of thing with dogs to rehabilitate them from surgery and balance issues. As we talked I went on line and found what she was talking about. I asked her whether she thought this might work with horses. We both agreed it was worth a try and Dante immediately came to mind as my first candidate.

The next morning I drove away from home and suddenly remembered that I forgot the balance discs in my shed. They had been collecting dust as I had stopped using them when teaching riding a while ago. I drove back, grabbed two pads and went to see Dante. The results were so astounding immediate and astounding Susan and I were amazed. Over two years later, after having talked to numerous veterinarians, scientists and watching countless numbers of horses improve, I realized I had to bring this to the public. Hence the SURE FOOT Equine Stability Program was born!

Stay tuned for more information on SURE FOOT. If you are interested in hosting or attending a SURE FOOT Workshop please contact Wendy at