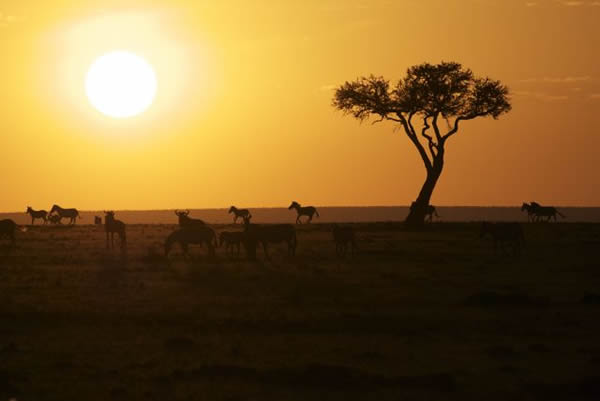 As dawn arrives mid-safari we head out for the “long day”, a ride of over 40km. Our camp moves from one side of the high plains to the other. The entire 8-day ride – over 250 km (150 miles) is without fences, gates or boarders other than river crossings. Although it was supposed to be the dry season, rain had come early to the Masai Mara and it is lush and green, as I would imagine of Ireland. The river crossings create detours for the vehicles as a horseback safari of 11 guests and over 14 crew move from one camp to another every 2 days. We stayed at 4 different campsites, made three complete moves with horses, kitchen (whip cream topped deserts and yoghurt dressed the breakfast table), tents, vehicles and dog over the course of 9 days in February 2010.

The staff took care of our every need providing delicious meals, comfortable beds (Brad and I had a double bed!), hot showers, drinks by the fire in the evening, polished boots for the next day’s ride and of course took excellent care of the horses, who bravely carried us across this expansive land past herds of zebra, giraffe, cape buffalo, elephants, impala and much, much more.The journey began many years ago when I met Mary Robinson of Horsing Around International at the Miami Airport in the late 1990’s. She asked if I would like to take a group on Safari to Africa. We did two trips to Botswana together at a base camp horseback safari company and then our lives went separate ways for quite a while.

In 2006 Mary and I reconnected as she had moved from Alaska to Oregon. Mary organized a clinic for me and I stayed in her home. Here was an enormous reminder of Africa, the books, art, photos and decorations all brought back the magic of the first two trips. And so the seed for another safari began to germinate. Mary, of course, poured water on it and I found fertile soil in my next clinic where several people jumped at the idea of going to the Masai Mara, Kenya. The omens were favorable as one student (and future safari member) was watching Out of Africa on TV and had West with the Night by Beryl Markham on her side table. It seems that fate had a hand in my decision to return to Africa – only this time to Kenya.

Mary has organized horseback safaris with Safaris Unlimited, Ltd, Nairobi, Kenya since 1977. Founded by Kenyan born Tony Church and now owned and operated by his son Gordon Church, Safaris Unlimited provided horses for Meryl Streep in the movie Out of Africa. Safaris Unlimited (SU) horseback safaris are traveling safaris, unlike many others where you ride out from a base camp each day. SU safaris require that the riders are able to gallop and spend many hours in the saddle. On the long day we head out at dawn and arrive at our new camp by dusk, with a leisurely nap during the heat of the day. As we are just below the Equator day and night are nearly equal, only varying by about 15 minutes from summer to winter solstice.

From horseback one gets an entirely different view of Africa than from the typical safari adventure in a vehicle. On horseback you get a feel for the terrain, the vastness of the land, the expansiveness of the sky and the detail that cannot be experienced inside trundling around in a motorized carriage. On horseback we ford rivers, ride past pods of hippo, rest under a lone tree in the middle of an open plain at lunch and gallop with the game. Passing herds of impala, gazelle, wildebeest, giraffe and elephant time expands, days seem like years when reflecting on all that happened since the sun rose above the curvature of the earth, in this full experience of life on the Masai Mara.

Greeted by Masai, called to by lion and hyena in the dark and finding the thunder box with a flashlight while hoping not to meet the leopard in camp all adds to the meaning of Safari. Colors of pink, gold, blue and white fill the sky and stars so bright they look like diamonds sparkling in the night. Voices of an ancient people singing their Elephant Song around the campfire and sharing tender moments with the new-found equine friend who carries you across the distance bravely and unerringly regardless of the rabbit that jumps up in front of her hoof or the smell of lion in the air. These are the memories that call to me as I sit at my computer once again.

Going on horseback safari is a once in a lifetime trip for most of people who have traveled with me to the Masai Mara. Those who went in 2008 recall it as a life-changing experience. “After my marriage, the birth of my daughter and the birth of my granddaughter, this was the most profound experience of my life”, said one gentleman who rode with us. And now having just returned home with another group there is the consensus that this trip “exceeded all my expectations”. And now having been there twice, I realize that riding with Safaris Unlimited across the plains of the Masai Mara is either a once in a life time experience or an addiction where you are compelled to return time after time to renew friendships, purpose, serenity, laughter and joy with the wonders that are Africa. For me going back this time was like returning home. The crew, some of whom are now second generation employees of SU, have become family. My arrival in camp was as if I had never left with laughter, hugs and smiles all around. The land, the people, the wildlife, the vast sky and fertile earth all call me back for another adventure. I will head Out to Africa again with another group of riders to share this incredible experience in September 2011.

Wendy Murdoch resides in Washington, VA and is an international riding instructor/clinician. She travels worldwide teaching riders of all levels and disciplines how to improve the horse’s performance by improving their body position. Her book,Simplify Your Riding and DVDs Simplify Your Riding – Ride Like A Natural Part 1 –3are available at www: murdochmethod.com. To contact Wendy please email wendy@wendymurdoch.com.